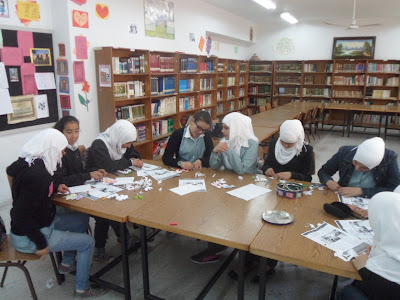 Great start to working with a new group of students at Abu Dis girls school. First we looked at twinning and talked about the work that Camden (CADFA) does, the girls were interested in hearing more about the schools that they are twinned with in London. Working together the girls thought of questions that they would like to ask Camden girls school and LSU, hopefully we will film them soon and upload them to the blog. It would be great the get a reply from the schools in London! 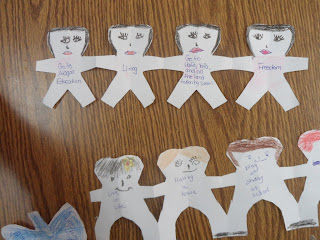 With a 9th grade class we spent a lesson looking at human rights, a topic we feel is really important, especially here in Palestine. Everyone made a paper chain doll, and wrote on them what they thought human rights represented. We then looked at the Universal Declaration of Human Rights and talked about which they though were the most important. The girls had lots of interesting ideas about human rights in Palestine and we discussed how they thought their human rights were effected living in Palestine. One example that came up was that they are not allowed to go to Al Aqsa mosque in Jerusalem. The separation wall means that people who live in Abu Dis are unable to get to Jerusalem which was once only a five minute journey away. These are some photos of the great work that they have been doing, hopefully there will be lots more to come! 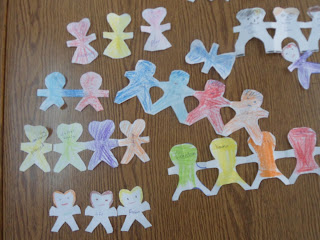